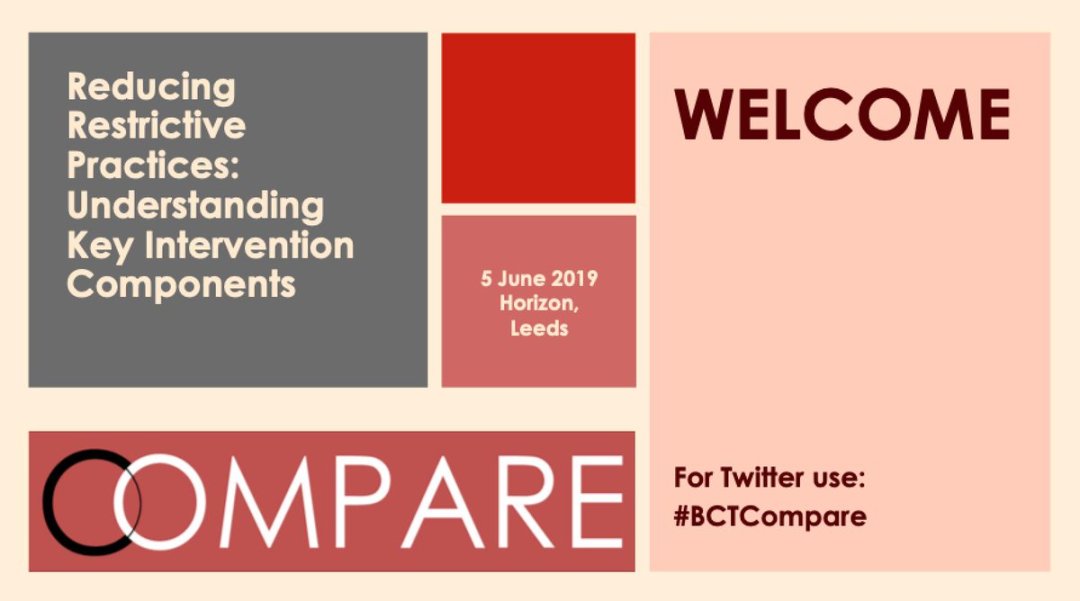 On Wednesday 5 June we held a dissemination event for the COMPARE study. COMPARE is an evidence review of interventions designed to reduce restrictive practices with adults in mental health inpatient settings. The aim of the event was to share preliminary findings from our evidence review with stakeholders (including frontline staff and service users) and provide an opportunity for discussion and feedback before we complete the study.

For anyone who was unable to attend in person, The Mental Elf took the event #BeyondTheRoom on Twitter. This was particularly important as it enabled people to follow along and participate in the discussion using the hashtag #BCTCompare.

In this blog we’ve tried to summarise the highlights from both within and beyond the room. You can also learn more about our motivation for the study, our preliminary findings, and why reducing restrictive practices matters by listening to the podcasts that we recorded before the event.

With the backdrop set, John introduced the first speaker, Iris Benson. Iris has lived experienced of restraint and uses her experiences to educate others. As part of this endeavour she has worked with us on COMPARE as an Expert By Experience. Iris spoke passionately about the need to address the use of restrictive practices.

Iris’ talk really set the tone for the rest of the afternoon, acting as a stark reminder of why we are doing this research, but also prompting us to look at the issue from a different perspective. This is why Iris’ involvement in our study has been utterly invaluable. As Iris pointed out, no-one behaves badly when they have experienced the kind of abuse that she has lived with. She asked how would you expect someone who has experienced trauma to behave when frightened? And how would you expect them to respond to being physically restrained?

In her typical fair-minded style, Iris went on to emphasise that she is not interested in blaming individual staff. Instead, she asked us to acknowledge that using restrictive practices can harm staff too and urged researchers, service users and staff to work together in this crucial area.

Following Iris was Tim Kendall who shared some reflections from his early days practicing psychiatry in the asylums. Tim is a co-applicant on the COMPARE study and a Consultant Psychiatrist for homeless people in Sheffield. Equally dedicated to improving reducing restrictive practices, Tim outlined the work he’s leading as National Clinical Director for Mental Health @NHSEngland @NHSImprovement and Director @NCCMentalHealth. It’s a powerful message when people traditionally divided into “them and us” make the same argument for change.

This really summed up the purpose of the afternoon, to bring different stakeholders together to consider how we can move forward in an effective manner. But what does the evidence say?

The initial goal of COMPARE was to systematically map all interventions designed to reduce restrictive practices with adults in inpatient mental health settings. Krysia Canvin introduced us to the intervention landscape.

Having sifted through 17,000 records, the team identified 150 unique interventions to reduce restrictive practices.

These interventions comprised all manner of procedures intended to reduce the use of restrictive practices, injuries and “challenging” behaviour or improve staff and service user experiences and safety. These procedures ranged from staff training, debriefing, data review, to introducing sensory rooms and changing staffing levels. Most interventions had multiple procedures.

Krysia explained how most interventions were one-off endeavours, but that we also identified 29 ‘intervention families’ where the same intervention had been used multiple times.

Unfortunately, despite all these good intentions, Krysia said that many of the interventions were poorly described, and few had been subject to high quality evaluation.

Krysia then drew our attention to two further issues. First, that few studies involved service users in the design or delivery of the interventions (and even fewer in their evaluation); and second, that many studies aimed to reduce harm or injury to staff – and subsequently measured the impact on these of their interventions – but only a handful were similarly focused on harm or injury to patients.

Consequently, she suggested, we are left with a disparate, complicated and low-quality evidence base: we simply do not know what the (most) effective way to reduce restrictive practices is. Geoff Brennan (#InTheRoom), founder of Starwards, suggested that rather see this as ‘a problem’ we should be heartened by the fact that there are so many initiatives. Krysia concluded by highlighting the difficulties of making comparisons between so many diverse interventions and how looking at their Behaviour Change Techniques could help.

What are behaviour change techniques?

The next speaker, Ian Kellar, brought a dual perspective. Ian shared his expertise on Behaviour Change Techniques, but also has a son with autism who experiences threats of restraint.

Ian explained what Behaviour Change Techniques (BCTs) are, that is, the very basic components that are used in interventions to change behaviour. Examples include ‘goal setting’ or ‘instruction on how to perform a behaviour’. The idea is that we can use these components to design interventions that target the behaviour we want to change using proven mechanisms. Ian described it as cracking open the ‘black box’ of interventions to see what exactly it is that leads to the change.

Can we use BCTs to avoid reinventing the wheel?

The final part of the COMPARE study involved looking closely at the interventions we found to see which (if any) Behaviour Change Techniques they used. Kathryn Berzins presented these findings, describing how we identified just under half of the available 93 BCTs in the interventions. Most of these BCTs were in the categories of ‘Goals and Planning’, ‘Shaping knowledge’ and ‘Antecedents’ (where the social or physical environment is altered to try to prevent incidents arising).

Kathryn reminded everyone that just because we didn’t detect a BCT in an intervention doesn’t mean it isn’t used, just that it’s not described anywhere. Kathryn explained that even thought lots of these interventions have been shown to reduce different restrictive practices, we don’t know which of their ‘ingredients’ are the active ones. If, however, we can test BCTs (or categories of BCTs) separately we will be able to work out which ones have the most effect and drop some of the others. Equally, there are also a lot of BCTs that don’t seem to have been tested for their potential to reduce restrictive practices that are certainly worth considering.

Kathryn concluded that we need to take a step back and try some more simple interventions (informed by service users themselves) otherwise we risk constantly reinventing the wheel.

We asked everyone attending the event as well as those following #BeyondTheRoom to provide us with some feedback on four points.

We’re really grateful to everyone who attended and/or contributed to discussion on Twitter. Some really important points were made that we will think about very carefully.

The event generated much discussion (even the day before!) and we were really pleased to receive some positive feedback.

Most importantly, we hope this is the beginning of an ongoing conversation (and action) between all of us who are working towards reducing restrictive practices. You can join the conversation by tweeting using the hashtag #BCTCompare, commenting below or you can contact us.